Last Night on the Town 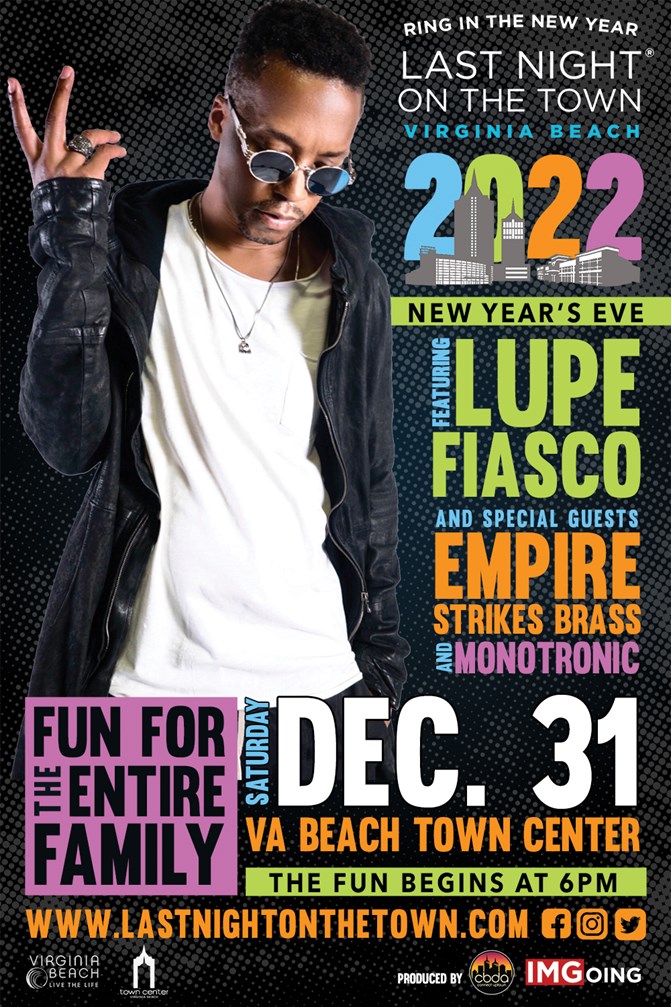 The VIP tent is stageside on Columbus Street.  Bar, complimentary select drinks, entertainment, photo opportunity with *featured entertainers, spectacular food and lounge in style as you bring in 2023!

Created by the Central Business District Association, Last Night on the Town (LNOTT) is Virginia Beach’s premiere New Year’s Event.  Now in its 9th year at Virginia Beach Town Center LNOTT is a FREE celebration suitable for the entire family.

Chicago-born, Grammy Award-winning rapper Lupe Fiasco gained national attention with his 2006 album Food & Liquor, which helped cement a new wave of Chicago rappers in the national conversation. Revisit the album that put Lupe Fiasco on the map, and changed the course of Chicago hip-hop forever.

The independent rapper who parted ways with his former label, Atlantic Records, following the release of 2015’s Tetsuo & Youth, is pegged as one of the most gifted lyricists and visionaries to grace the mic.  Rising to fame in 2006 following the success of his debut album, Food & Liquor, Lupe has released six acclaimed studio albums; Drogas Light, released in 2017 on his own label, 1st & 15th.   These albums have netted 3 platinum singles, 3 RIAA Gold Certifications, 12 Grammy nominations, and one Grammy Award in 2008 for his infectious single, “Daydreamin,” feat Jill Scott.

While musical genius and ingenuity are at the forefront of Lupe’s achievements, the artist extends his innovation to projects that aim to foster creative discourse and opportunities in underprivileged and impoverished communities.  As the co-founder and co-owner of community initiatives such as, We Are M.U.R.A.L, The Neighborhood Start-Up Fund, Society of Spoken Art, and Studio SV, Lupe Fiasco proves that he is more than just a mouthpiece for change, but a committed facilitator of intellectual community discourse and outreach.

Asheville, NC-based Brass/Funk/Rock band Empire Strikes Brass has a lot to say with a big sound. Chock-full of serious groove from a thumping rhythm section highlighted by lush horn arrangements played by a thick horn section, the band’s compositional roots as well as its creative and collaborative soul contribute lots of depth to their original tunes and covers that speak volumes to ESB’s evolution.

Founded in 2012, ESB has grown from a party band of friends playing New Orleans-originated or inspired second-line and funk tunes with elements of rock and jam. Now, it consists of a collective of players, singers, songwriters, and producers who have found an original sound that fuses their individual musical influences with fresh ideas while still holding true to their foundation.

When Empire Strikes Brass comes together, whether live or in the studio, the sound is undeniably strong and solid. The band’s debut album was recorded at Asheville’s own renowned Echo Mountain Recording Studio and released in 2017.  Entitled Theme For A Celebration, it was tapped as one of the year’s top 100 releases by WNCW 88.7 radio. ESB’s newest release Brassterpiece Theatre (2019), also recorded at Echo, is a fierce follow-up and both albums are available through all major music distribution streaming, sales, and listening platforms.

Since emerging in 2016, Monotronic have maintained their status as a ponderous and provocative enigma. Conceived by guitarist/producer Ramsey Elkholy, Monotronic started as a loose collective of NYC-based musicians. The rotating cast of musicians have shared the stage and recorded with the likes of Joe Jackson, Robert Randolph, Elliot Moss, The Spin Doctors, and Dweezil Zappa, to name a few.

The Monotronic sound is a combination of electronic music with a wide range of cultural influences, mostly drawn

from Elkholy’s time spent in Calcutta studying Indian classical music and his travels throughout Southeast Asia, where he spent nearly two years in the rainforests of Sumatra, Indonesia among the Orang Rimba tribe. He describes Monotronic as “a concept, whereby each instrument can be heard as a continuation of the other and the music sounds as one distinct whole, emanating from a single source”.

Along with performing at iconic venues up and down the East Coast and New York City, the band has also graced the bills of festivals such as Disc Jam and Meeting of the Minds.

CBDA serves as an advocate for its membership and supports the growth and development of the business community within the Pembroke Strategic Growth Area. In doing so, it is recognized that advancements in policies and amenities within this urban core ultimately benefit the entire city and the region as a whole.

CBDA works with government, community, and business leaders in developing meaningful relationships to promote the area as a primary center for business which offers unique professional, retail, residential, cultural and recreational opportunities. It provides a forum to identify and define issues of importance to its membership, including the attraction to, and retention and growth of businesses within the Pembroke Strategic Growth Area.

CBDA hosts a variety of informative and educational programs and events attended by prominent business, political, and community leaders. These events provide exceptional networking opportunities for members and bring together individuals and businesses with similar goals in support of the Pembroke SGA.

About IMGoing
Based in Virginia Beach, IMGoing is a premier producer of concerts and events throughout the state of Virginia. IMGoing operates the Atlantic Union Bank Pavilion (Portsmouth, Virginia) and Virginia Beach Events, the entertainment and events program for the city of Virginia Beach. In addition, IMGoing promotes events at venues throughout the State including The Hampton Coliseum, Chrysler Hall, Altria Theater, Roanoke Performing Arts Center, and Carpenter Theatre. In addition to the nationally touring artists and festivals, IMGoing has produced many community and Military events. No matter the size of the events, IMGoing’s team of experienced professionals is up to the task.

WVEC-TV and BOB FM broadcasts live from the event. Free parking is available for all attendees in the Town Center garages and at Pembroke Mall.

For more information visit lastnightonthetown.com or contact CBDA at connect@cbda.net. 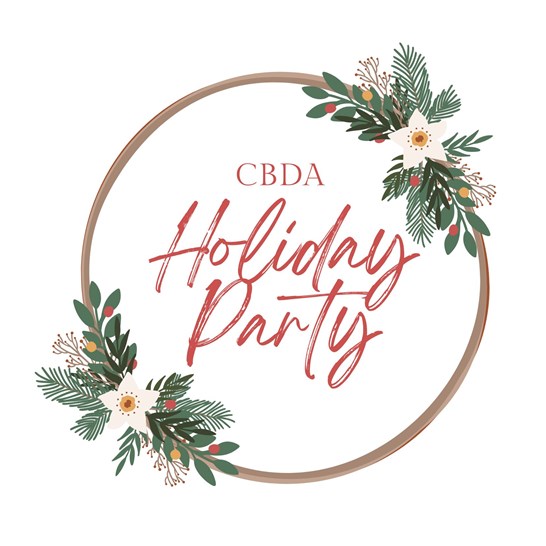